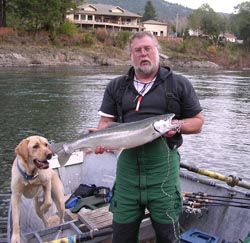 Mike got his nickname from his days back packing into trinity wilderness area. All emergencies were covered with a backpack weighing over 60 pounds. Climbing rope, camera, fishing gear and of course two bottles of the best cabernet he could afford. Friends started calling him Bernard like the dog St. Bernard.

Born in Pennsylvania he had to learn all the tricks fishing with cane polls. Before he was 4 years old relatives had to make a rule that Mikie had to put back all his fish before he left. Parents moved to California where he included creeks and the bays to his fishing locations. Football kept him occupied in high school with the hope that he would play college ball at Humboldt. Reality hit when injuries made him realize that his first interest (fishing) was a lot better bet if he wanted to be able to walk when he got old. In 1974 the Eel River was home to some of the greats in fly-fishing for salmon and steelhead. While going to school at College of the Redwoods, studying drafting and construction technology, Mike set a path to learn all he could about the rivers in northern California. The day before Thanksgiving in 1974 he spend the night at Early Hole on the Smith River and has not missed a Thanksgiving there since. I met Mike during his second year in college. Working the summers and going to school until his money ran out soon change to fishing, dating and then working until his money ran out. My family picked him out to be the one before me. His obsession to be very good at fishing led him to weeks away from me, with an occasional phone call promising to come home when the fishing slowed down.

Thirty years of marriage and five of dating I do not think he has ever spent a day without thinking about being on the water. Before taking time off from guiding to stay near home for the kids, he was featured in magazine articles like Bassmasters, California Game and Fish, The Inside Angler including numerous photos and interviews in print. Mike was even on TV as the premier guide for Trout Unlimited on the Garcia and Gualala Rivers. A lot of people know him from public hearings where he has testified in front of all the state agencies about fishery protection and enhancement. Both of us where board members for The Friends of the Russian River. Mike was a member of Trout Unlimited for many years, served on the state board and for four years as president of the Redwood chapter. Recently he left the Governors comitee on Salmon and Steelhead Restoration. Several of Mike’s fly designs are used in variation or original form thru out the world. Clients are always asking mike to send his fly’s to them so they can try them out in there home waters. A fishing weight for drift fishing is paten pending that he designed. Steelhead fishermen all over will so have a set of Dilly Drifters in there tackle box. Currently Mike is 56 years old and in better shape than he was 10 years ago. He is planning to fish another 56 years even if he has to travel out side of California to do it. Fishing with him is very easy. Safety and comfort is a big concern to him and everyone feels like their part of the family when their fishing trip is over. I would not go with any other guide even if they were better looking.